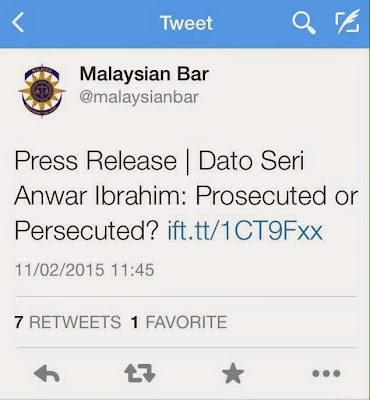 WE, concerned members of the Bar, note with utter disbelief and amazement the Press Release of Christopher Leong of 11 February 2015, which implies that Dato’ Seri Anwar Ibrahim was ‘persecuted, not prosecuted’ in respect of his charge and conviction by the Federal Court of Malaysia on 10 February 2015 for sodomy pursuant to Section 377B read with Section 377A, of the Penal Code.

The stand and public statement made by Christopher Leong militates against the fundamental and statutory duties of the Malaysian Bar, which includes the protection of the integrity and sanctity of the judicial system.

Christopher Leong must appreciate the legal position that “trial by media” is not only wrong but must be abhorred in any civilised judicial system, since it is a fundamental requirement that the courts of law can only determine a dispute based on evidence presented in court and not otherwise. As cautioned by His Lordship Mohamad Ariff Md Yusof JC (as His Lordship then was) in the case of Dato’ Seri Ir. Hj. Mohammad Nizar Bin Jamaluddin v Dato’ Dr. Zambry Bin Abd. Kadir [2009] 1 LNS 1827:

“I believe the course of conduct I took falls quite closely with this recommended practice. It was not an outcome or a reaction against adverse comments on blogsites or certain sections of the mainstream media. It will be a sorry day for the judiciary if a judge’s conduct has to be conditioned by these extraneous factors, since they will fetter the independence of the judiciary unduly.”

Christopher Leong has brought the judiciary, a fundamental element in the administration of justice in Malaysia established under Article 121 of the Federal Constitution, into public contempt and ridicule by misrepresenting both facts and the law applicable in Dato’ Seri Anwar Ibrahim’s sodomy trial and conviction by the Federal Court. He does this by questioning why the complainant, Mohd Saiful Bukhari Azlan, is not charged with abetment under Sections 377A and 377B read together with Section 109 of the Penal Code.

This is an utterly outrageous statement for even a lay person to make, what more a senior member and leader of the Malaysian legal profession.

As legal practitioners ourselves, we are outraged, nigh embarrassed, by his remark which clearly contravene not only the Legal Profession (Practice and Etiquette) Rules 1978 but also a statutory provision of the Legal Profession Act 1976, namely Section 42 which stipulates that the Malaysian Bar must “promote good relations ... in the administration of law and justice in Malaysia.”

Such a statement is wholly unbecoming and based on flawed reading of the provisions in the sections concerned.

A plain reading of Sections 377A and 377B of the Penal Code must certainly lead a reader thereof to conclude that the statutory provisions do not criminalise homosexuality per se but sodomy, namely the act of insertion by a man of his penis into the anus of another person, be that a man, woman or child. Such an act is considered vile by the values held by the vast majority of Malaysians and rightly attracts sanction.

This is common knowledge and must certainly be within the awareness of Christopher Leong, being the President of the Malaysian Bar.

Also, contrary to what he claims, the aforementioned provisions are in no way rarely used, but are used on a recurring basis, one such example being the previous conviction for sodomy of one Abd Rahim bin Abd Rahaman by the Court of Appeal in 2010 for multiple counts of sodomy.

The full statistics of cases of this nature is easily accessible by requesting the same from the other arm of the legal system being the Attorney General’s Office.

Did Mr Christopher Leong avail himself to these statistics, before making a brash and unsupported allegation?

Christopher Leong’s sanction and participation in the continued smear of the Malaysian judiciary in this matter, by irresponsible citizens as well as elements of the international community must be corrected immediately and to this end, we, concerned members of the Bar, CALL UPON MR CHRISTOPHER LEONG, PRESIDENT OF THE MALAYSIAN BAR TO IMMEDIATELY retract the Press Release dated 11 February 2015 AND to tender an unequivocal and unconditional public apology to the judiciary AND similarly to communicate the same to  all international bodies and entities, FAILING WHICH we shall be constrained to take all necessary steps to call for his immediate resignation from the position as President of the Malaysian Bar and call upon the Attorney General to take the necessary contempt proceeding against  Mr. Christopher Leong.

We also wish to place on record that in no way does the Press Release of Mr. Christopher Leong dated 11 February 2015 represent the views of the majority members of the Malaysian Bar.

Press Statement by concerned and currently practising members of the Malaysian Bar:- 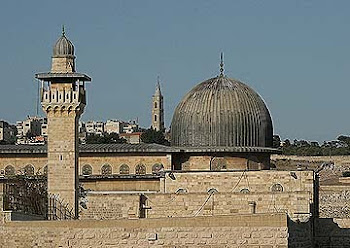